Two weeks after hiking Mount St. Helens we found ourselves climbing its big neighbor 34 miles east. At 12,281ft Mount Adams is the 2nd highest peak in Washington and like St. Helens it’s an active stratovolcano in the Cascade Volcanic Arc. Here’s a close up of Adams taken from the summit of Mount St. Helens. 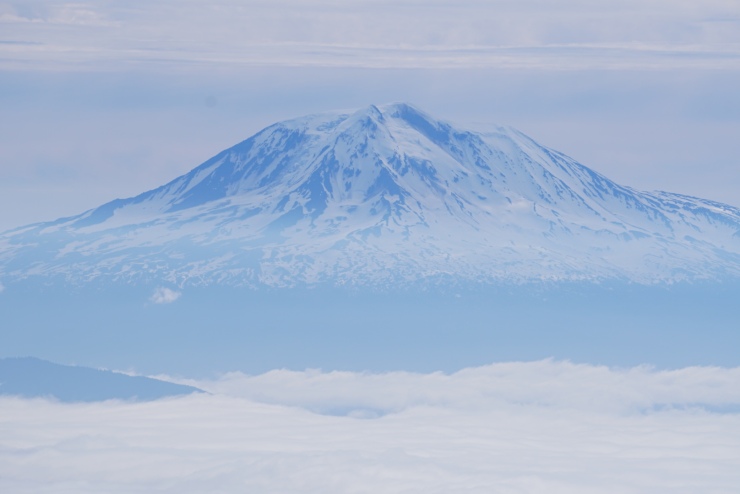 This would also mark our 3rd straight weekend of backpacking so we felt very prepared. To make things even better we’d be sharing the experience with a great group of hikers! Our plan was to take the south climb 6 miles up gaining 6700ft. It’s not an easy hike but it’s certainly less technical than the easiest routes up Mount Baker or Mount Shuksan. 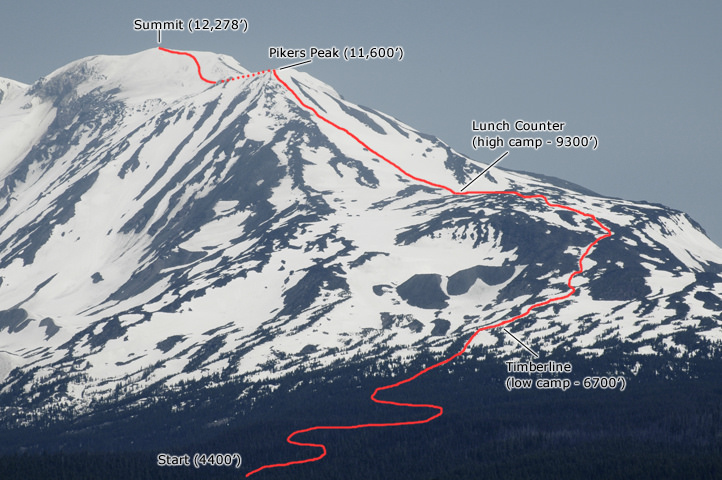 The quickest way to Mount Adams from Seattle is to drive down to Oregon then back up into Washington via the Hood River Bridge. We didn’t mind as we could grab our favorite lunch at Brigham Fish Market in Cascade Locks, OR! The last stretch of the drive through the Gifford Pinchot National Forest to the Cold Springs trailhead is a wicked one. I was so focused on the road ahead so I didn’t notice our friends had turned back due to a flat tire. We would eventual realize they weren’t coming so we drove back to find them stranded. Everyone quickly piled into my single cab truck so we could get the hike started. It was getting late but luckily we planned to camp at Lunch Counter before making our summit push the next day.

From the base of Mount Adams to Lunch Counter at 9,000ft we trudged through snow and lava rock scree. As the sun began to set a beautiful shadow of the mountain appeared.

At Lunch Counter we searched for a camp spot that could best shelter us from the 40 mph winds and most of us did (one tent was broken by wind gusts). This made our chores like boiling snow for water much more difficult but that didn’t take away from the majestic sunset!

All you could see was a blanket of clouds and two other giant mountains! 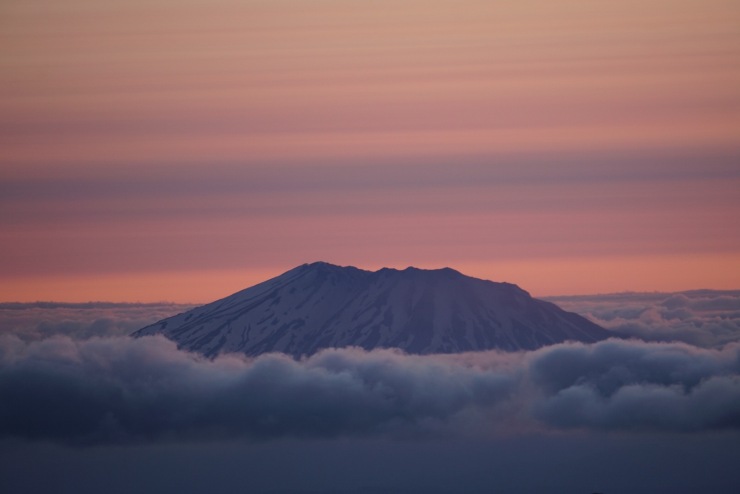 Technically three as you can see Mount Jefferson peaking out to the left of Mount Hood. 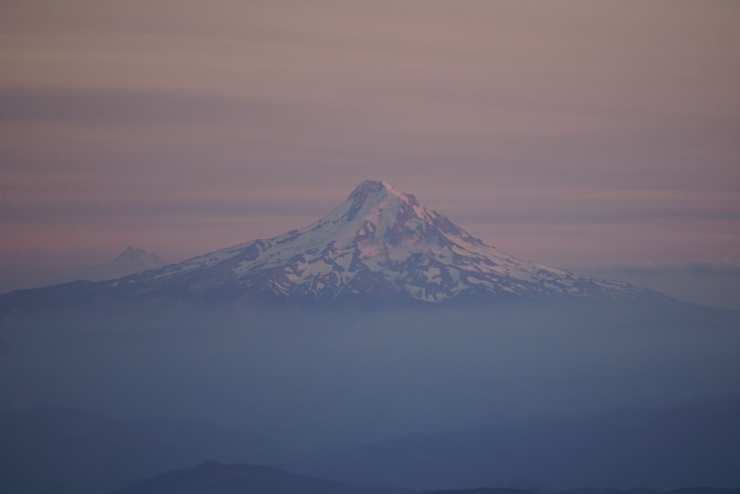 There was something extra special about these mountains and I wasn’t the first person to think so. A Native American legend tells a story about the three smoking mountains that guarded the Columbia River! Wy’east (Mount Hood) and Pahto (Mount Adams) were the sons of the Great Spirit who fought for the love of La-wa-la-clough (Mount St. Helens). La-wa-la-clough chose Pahto so jealous Wy’east struck him on the head giving the mountain its flat summit. Mount Rainier has a similar flat shaped peak which is why some call Adams baby Rainier.

As we slept that special feeling turned into more of a dirty feeling. The wind was so strong dirt had us covered. This delayed our morning start but when we could see the line of ants going up the mountain we had to join them.

That picture shows the false summit, Pikers Peak which can dishearten those unaware it’s not the true summit. This is the steepest section of the hike but following boot paths, using crampons and an Ice axe we climbed up with ease.

It might not be the true summit but the views are still pretty exceptional!

After a short break we pushed on to the summit of Mount Adams! 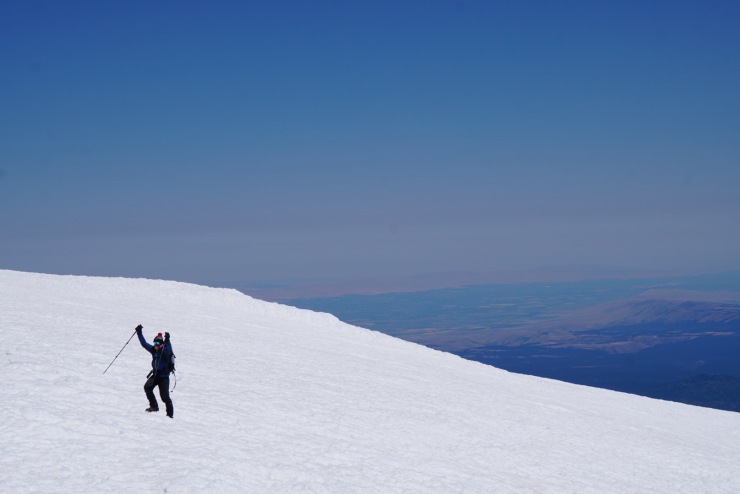 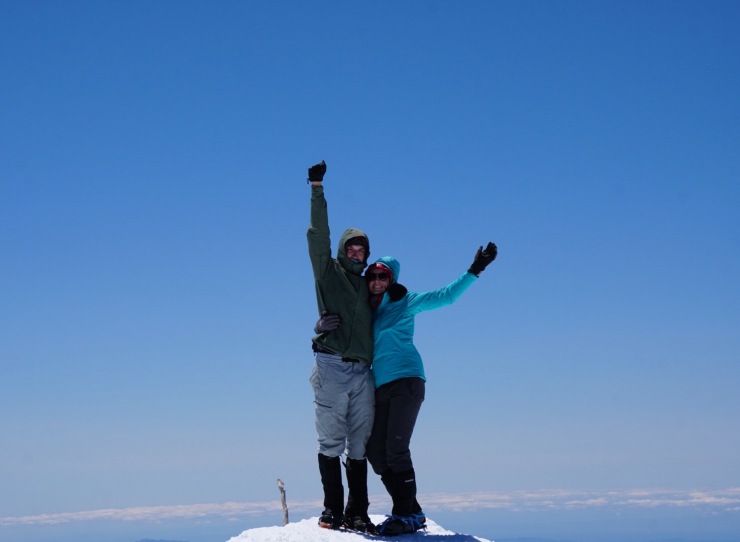 As always the view from the top was the best of all!

Only one mountain stands taller and that’s Tahoma (Mount Rainier).

The wind was still pretty strong so after a few photos we headed back to the false summit where we could find a little bit of shelter. Ernie was happy! 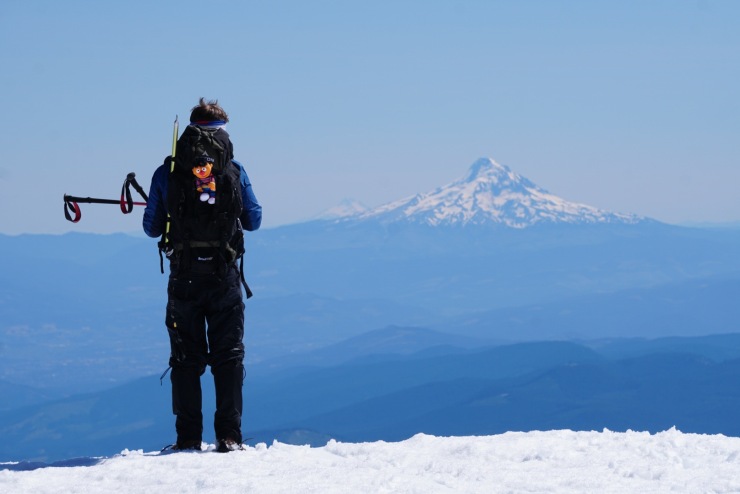 I love to see people express their individuality in the wild! Some people climb with an Ernie doll and some a tusk horn.

The views were breathtaking but nothing makes a vista more cherishable than sliding on your butt.

We love glissading which is why I knew we’d love skiing!

The only thing I’d change from the trip would be using more sunscreen. With the reflection off the snow you can’t afford to skimp especially in the nostrils… We’d find that out later but on the way down we saw some mountain goats, cut our legs on lava rock and spent more time glissading. The most interesting part of the trip was driving all eight of us and our human sized packs down National Forest Road 500 in my single cab truck. It all ended up working out. Our buddy had a spare tire and everyone made it home safe!

Thanks for the memories Pahto!