Excited to be back in Canada! For awhile we had our eye on hiking to Panorama Ridge in Garibaldi Provisional Park so when we found an open tent pad at Garibaldi Lake in July we quickly booked it. We’d be going with two awesome friends from Vancouver who we met on our first hike in Garibaldi. They were fantastic company and I felt right at home riding in Rob’s sweet old school Jeep Cherokee. Before we jumped in the Jeep we killed some time at Kitsilano Beach Park.

From Vancouver we drove two hours north along the Sea to Sky Hwy to the Rubble Creek trailhead somewhere between Squamish and Whistler. Day one we’d hike 5.2 miles (8.5km) gaining 2,700ft to Garibaldi Lake. There are many routes from Rubble Creek but thanks to the great signage in the park you don’t need to worry about getting lost! If you’re from the US just remember that 1 mile equals roughly 1.5 km. The hike was a calf burner, one where you put your head down and just keep moving. Eventually you’ll reach the first of many bright colored alpine lakes, Barrier Lake. 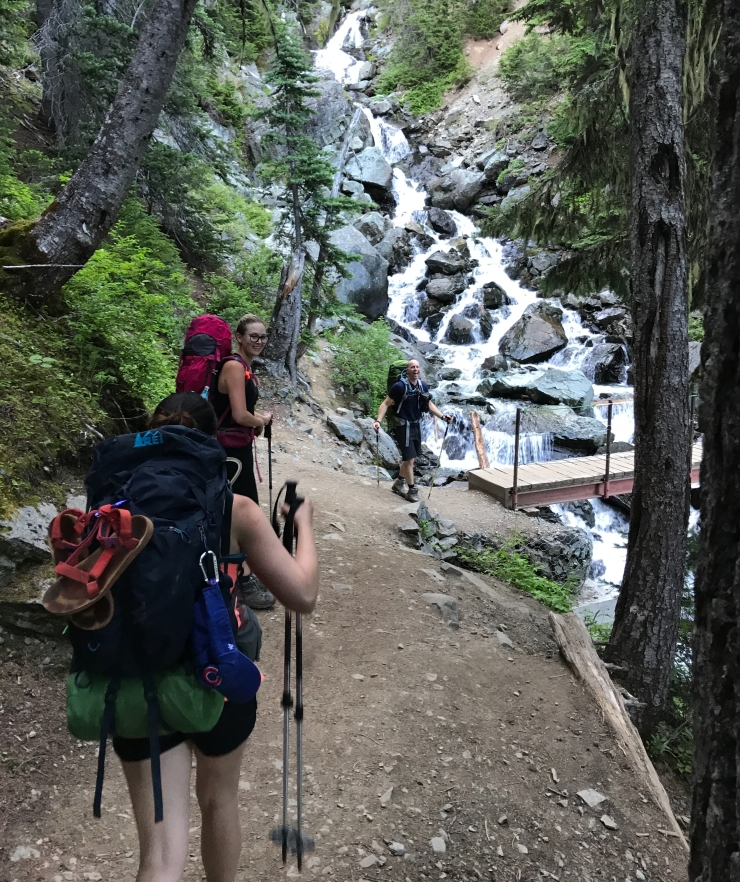 From there you’ll slowly gain elevation until descending a spur to the Garibaldi lake shore. When you first catch a glimpse of the lake you’ll feel like you just witnessed a magic trick for the first time.

I’d never seen water that clear or blue before. You could see every fish swimming, it was just incredible! 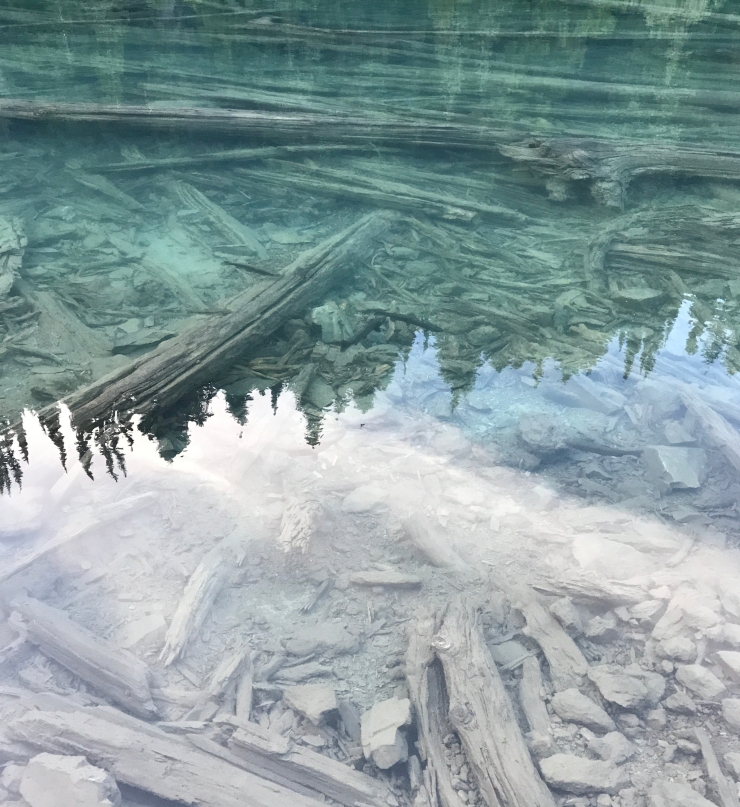 The water was stunning but the backdrop was even better! Seeing glaciers hang all over the Garibaldi Range was marvelous! 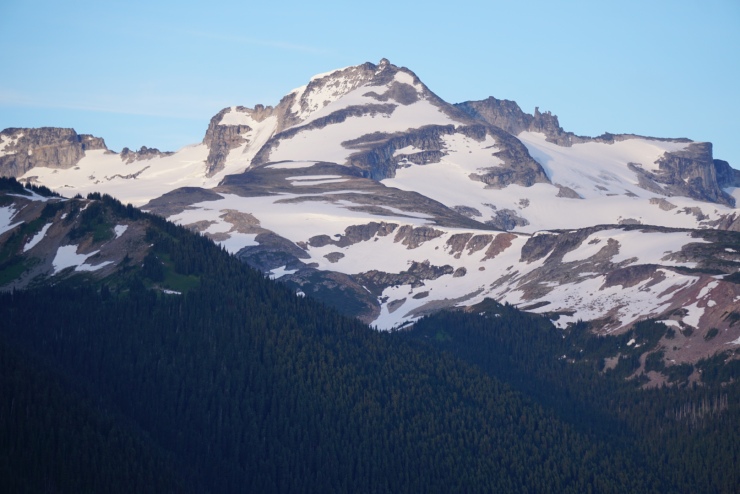 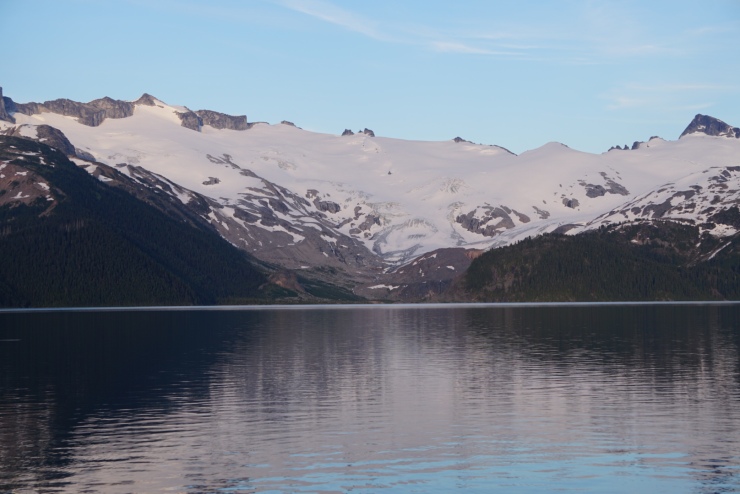 Notice the G for Grant or Garibaldi! 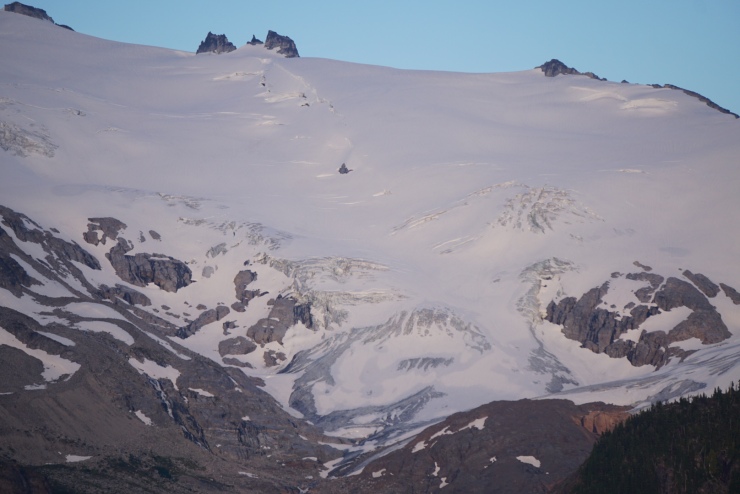 That night was simple and pleasant except for the one of us who was brave enough to jump in the lake.

I did drink from the lake (filtered of course) which made me feel like I was drinking Michael’s secret stuff from Space Jam. It was sooo good and helped us wake up before sunrise. Having breakfast at the shoreline was like something out of a dream. The reflection was perfect!

We certainly didn’t think anything could top this scene but we were excited to find out. We had 4.2 miles (6.8km) and 2,000ft of gain between us and the legendary Panorama Ridge. The views the entire way were stunning. We’d pass a few more bright turquoise lakes and loads of wildflowers! 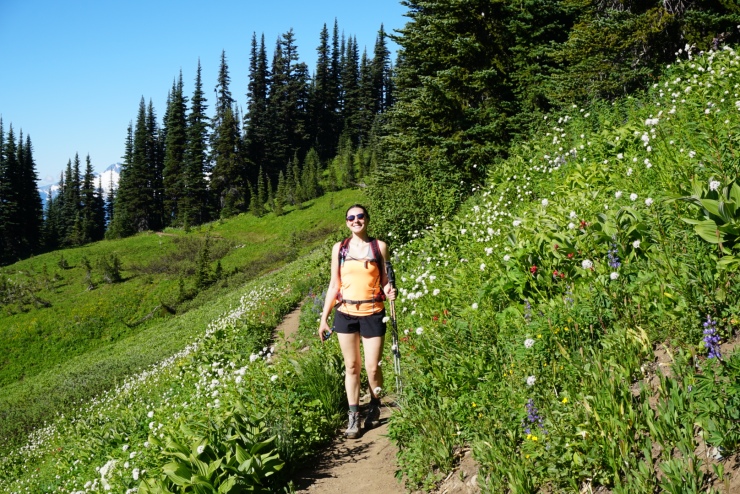 My partner in crime goes bonkers for wildflowers so it was fun to see her so happy! Also constantly in view and asking to be hiked was the giant pinnacle of volcanic rock named Black Tusk. We’ll be back for the 2.5 mile spur trail up to its summit at 7,608ft. 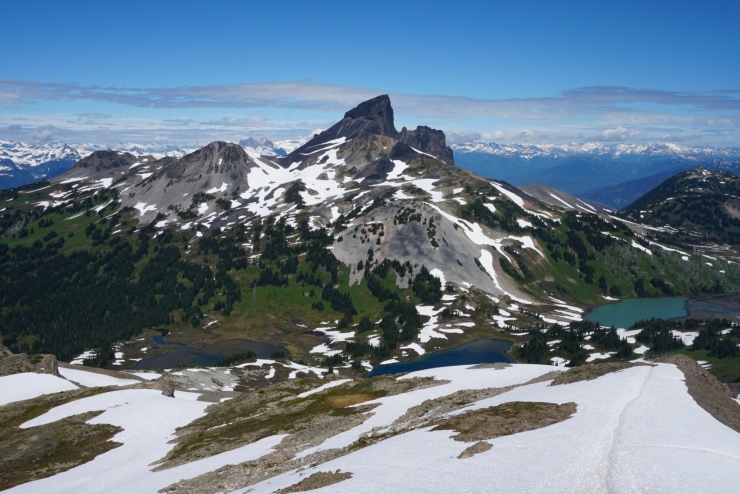 With every new step more mountains and lakes would appear and the excitement kept building!

When we finally reached the ridge at just under 7,000ft our jaws dropped to the ground. We had a 360 degree view and best of all was the bowl of ice blue raspberry lemonade Kool Aid… I mean Garibaldi Lake.

I’d seen many pictures from this spot but seeing it in person was something I’ll cherish forever! In a contest of pure beauty this vantage point could rival anything I’d ever seen before. I also remember thinking to myself it’s amazing what you can accomplish by putting one foot in front of the other. 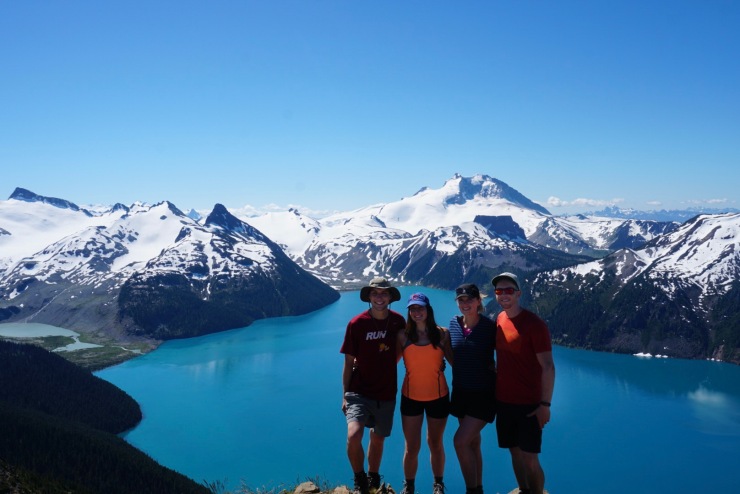 This shot of me representing my late grandfather was captured by Rob Nelson who is an incredible photographer. Check him out at robnelson.ca. He also took the two shots below which are two of my all time favorites. 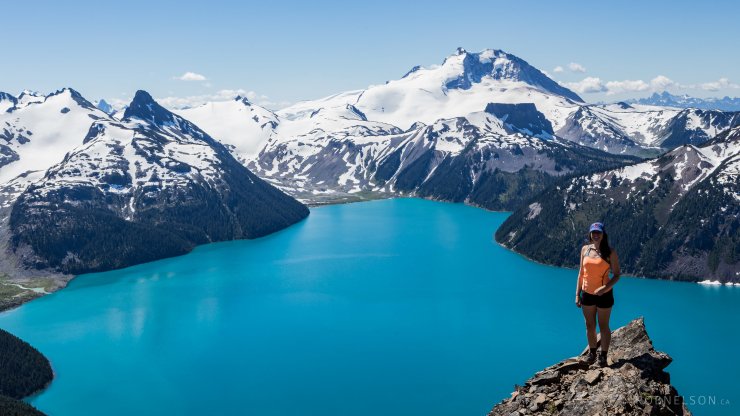 Ellie and I are both proud of where we are from (notice the hats) but we love ALL places especially Canada!

We spent about an hour taking hoards of pictures. There was so much to look at in the northern terminus of the Cascade Volcanic Arc. 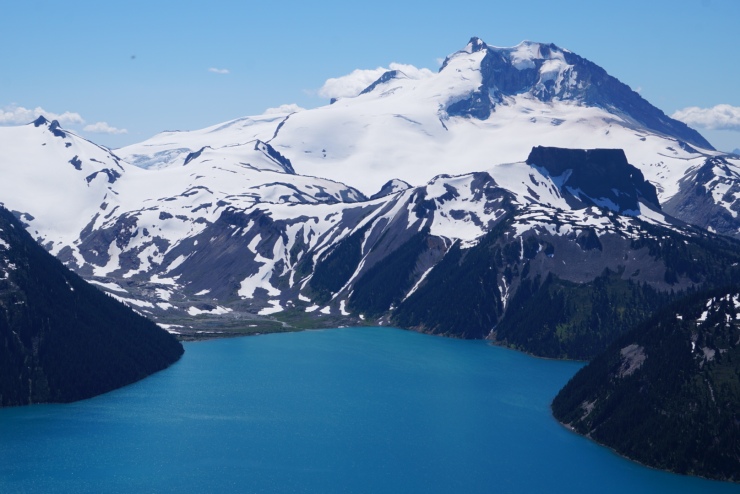 Mountains, volcanoes and glaciers almost completely surround the lake. Mount Garibaldi, Dalton Dome, The Table and Sentinel Glacier are a few of the features. 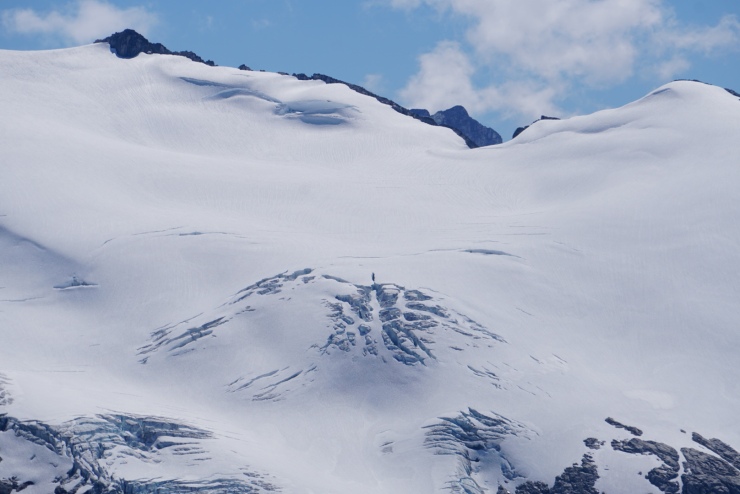 Also in view were Sphinx Glacier, The Sphinx, Guard Mountain, Mount Price and Mount Tantalus out in the distance. 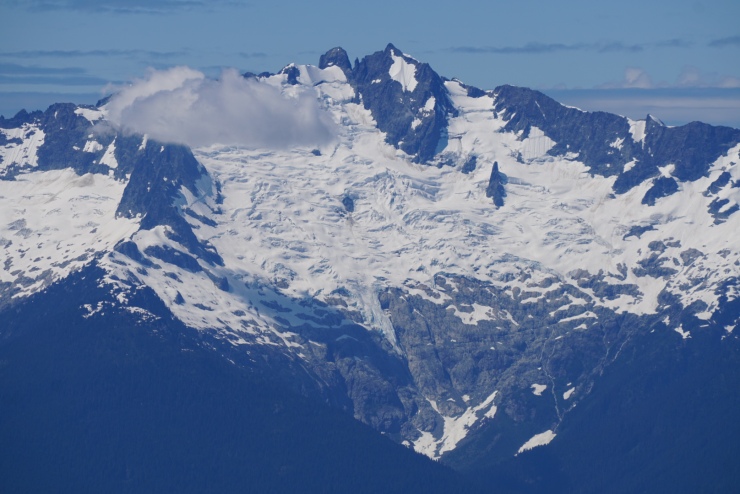 You could see our camp spot marked by the lava outcrops called the Battleship Islands.

To top it all off we saw an eagle flying by The Sphinx.

Many more photos were taken… 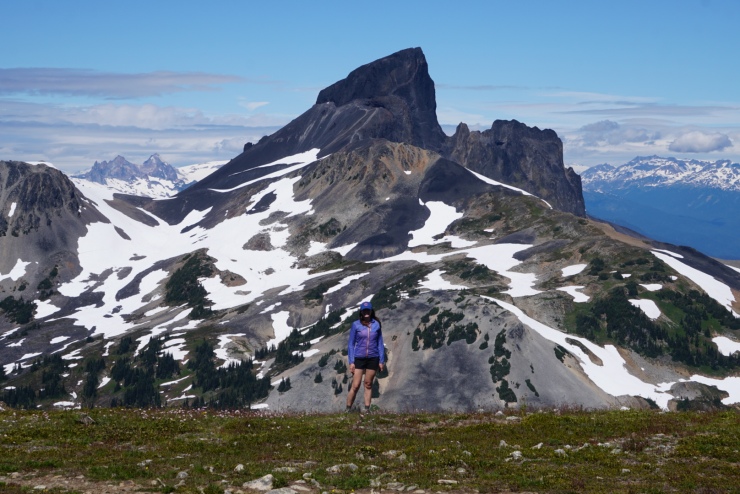 Some food was also consumed.

Eventually we had to say goodbye and begin our 10 mile (16km) hike back to Rubble Creek. There were plenty more sights to keep our spirits through the roof.

We were thankful for our early morning start as we would pass a lot of people going down. Some seemed ill equipped which made my Garibaldi-jabroni comment relevant. We were so happy and didn’t rush getting back. First we had to grab our gear and take those mind blowing steps into the lake one more time!

After filtering some more water and gathering everything we began our 5 mile (8km) descent. My feet hurt so good! This was arguably the best hike out of the 102 hikes I took in 2017! Garibaldi Provincial Park in British Columbia has it all!

That night we’d stay with our wonderful friends in Vancouver and were surprised by a firework show a few blocks down on the English Bay. This may have been better than the money we saw blow up on the 4th of July in Seattle. What a fantastic way to end the day!

With Vancouver being so close to us we plan on making many more trips to our friendly neighbors in the north! Next up Wedgemount!