Cumberland Island is one of only 7 US designated National Seashores. You’d think there would be more but that that rarity makes a trip here feel extra special. It’s also the largest (and southern most) barrier island in Georgia which is cool since it’s mostly all protected wilderness. The only way to get to this wild island is by watercraft. If you’re without your own vessel like we were you can purchase a $28 ferry ticket. Make sure to plan in advance as there a very few ferry times offered and campsites book up early. It’s only a 7 mile ride from St. Mary’s to the Sea Camp dock on the southern tip of the island and once you arrive there will be plenty of wildlife to greet you.

Besides mountains this island has everything you’d hope for in a backcountry adventure. There are numerous historical structures, scattered ruins, wide marshes, undeveloped beaches, pristine maritime forest and an abundance of wildlife. The most common wildlife is feral horses. One morning I was walking on the Parallel Trail to the privy near Hickory Hill and I was forced to jump out of the way for a stallion taking its morning jog. We also witnessed wild turkeys, armadillos, dolphins and a small boar that looked more like a pig.

Because of the beauty of this place I tend to only reminisce on the joy it brought me and not the mosquitoes from hell. Now in Cumberland Island’s defense we took this trip in the beginning of September 15′ while there was still prime summer weather and our preparation was minimal. I once again had to learn the hard way. To this day I have never been more covered with bug bites and ticks but most of that was because of improper clothing (no pants or long sleeves) and forgetting bug spray sure didn’t help. I believe the ticks were from the Willow Pond Trail but that was the quickest way to the mind easing and mosquito less beach!

When not on the beach we had to stay as active as possible to avoid the constant clouds of mosquitoes so we covered a lot of ground but did so in a very grueling and inefficient way. We were both training for a marathon in Savannah so thought this would be a great place for a practice run. We ran 4 miles to the Plum Orchard Mansion and 4 miles back to Hickory Hill. The Plum Orchard has the only potable water besides Sea Camp so it was a good route to stay hydrated. We crushed the run but realized we needed to fill up our water bottles and bladders so we walked the same 8 miles to fill up at the Plum Orchard. We were almost back from walking when I had a stabbing pain in my groin that really slowed us down. That was until a volunteer from the Plum Orchard happened to drive by and took us a bit closer to our site. Thank god for her! 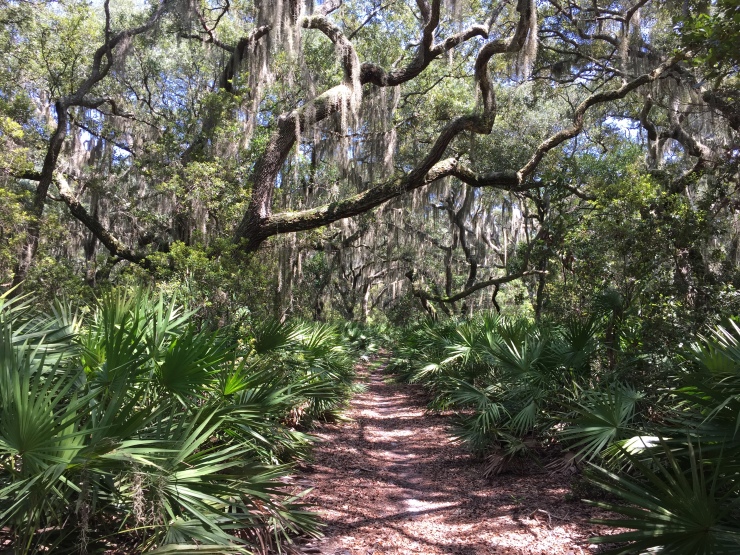 The next day the pain was gone so we walked our 5.5 miles back to Sea Camp through lush forest canopies covered in tangled vines with saw palmetto directing our way. As we awaited the ferry at the Sea Camp dock we walked around the biggest and best named ruin on the island, the Dungeness Ruins! It is very interesting like the history of the island itself. The Dungeness Mansion was once a place for special social galas for important statesmen and military leaders until someone got pissed off and burned it down in 1959.

There is a lot more to see and learn on Georgia’s wild island so that’s why are heading back in November 16′. This time we hope for fewer mosquitoes but regardless we will be prepared for the elements. This park is a must visit even for a day trip just avoid going anytime close to summer. It was a great first experience backpacking on island time and I owe it all to the Carnegie family for making sure this land stayed protected!